Iodine is essential for proper thyroid gland function. Kelp, seaweed, and multivitamins with added iodine are some of the over-the-counter (OTC) supplements that contain relatively high amounts of iodine. These supplements, marketed under various trade names with the claim of improving thyroid health, are readily available in the United States for self-treatment of various ailments.

People without underlying thyroid disease usually remain euthyroid, despite the ingestion of large amounts of iodine. [1–4] Other individuals, upon exposure to iodine, may develop thyroid dysfunction and autoimmunity. There is some evidence that iodine ingestion, especially if taken in an acute fashion, may be responsible for the development of thyroiditis and thyroid antibodies. [3–5] In this paper, we report four patients who developed thyroid dysfunction after ingesting OTC drugs containing large concentrations of iodine.

In February 2010, while still taking methimazole (2.5 mg per day), the patient reported to the endocrine clinic complaining of 40-pound weight loss, insomnia, marked heat intolerance, and anxiety. Her heart rate was 120 bpm, her BP was 108/80 mm Hg, she had fine tremors of the hands, and she again had mild exophthalmos. Examination of the thyroid gland showed a 60-g diffusely enlarged goiter that was firm in consistency. A bruit was also heard over the thyroid gland. Thyroid function studies showed a TSH level &lt;0.001 mIU/mL, free T4 = 6.87 ng/dL, and total T3 = 938 ng/dL. The TSI was 210% and TBII was 74%. Thyroid ultrasound revealed an increased goiter size with markedly increased vascularity. Upon further questioning, the patient admitted that she had been taking OTC Tri-iodine TM (EuroPharma, Green Bay, WI), which contains 12.5 mg of elemental iodine, and that she had been taking 3 capsules daily for several days each month since December 2009 in order to improve her thyroid status. Both the patient’s urine and serum iodine levels were markedly elevated, with values of 1,962 μg/24 hours (normal, &lt;500 μg/24 hours) and 385 μg/L, respectively (Fig. 1). The dose of methimazole was increased to 60 mg per day. The patient was advised to stop taking Tri-iodine TM and start a low-iodine diet. Even after 2 months of high-dose methimazole treatment, the patient remained thyrotoxic for the next 4 months. Only after 8 more months did her TSH level reach 0.48 μIU/mL, and she preferred to remain on methimazole. In October 2010, her TSH finally normalized. 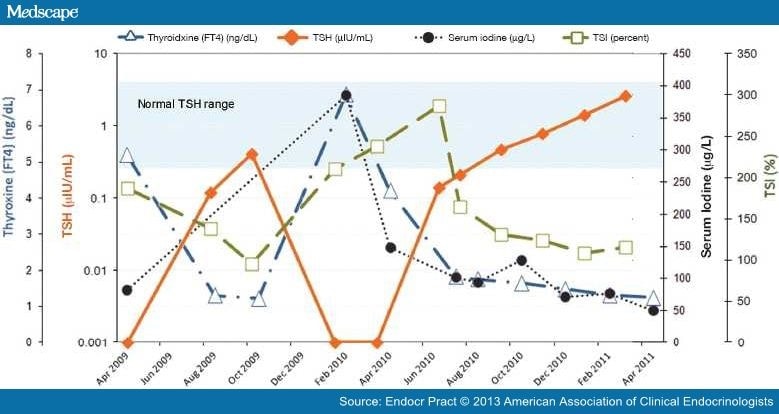 A 29-year-old female presented with symptoms of nervousness, irritability, heat intolerance, and unexpected weight loss of 15 pounds over 6 months. The patient had no neck pain, eye symptoms, or any systemic symptoms such as fever or chills. She was not taking any prescription drugs. Physical examination revealed that her HR was 102 bpm and her BP was 108/65 mm Hg. She had fine tremor of the outstretched fingers, and a normal eye examination. The thyroid gland was not palpable; no thyroid bruit was heard. Examinations of the heart, lungs, and abdomen were normal. Deep tendon reflexes were brisk. A clinical diagnosis of thyrotoxicosis was made. Laboratory tests revealed TSH = 0.001 μIU/mL, free T4 = 4.3 ng/dL, T3 = 321 ng/dL, thyroid peroxidase antibody (TPO Ab) = 18 IU/mL, thyroglobulin antibody (Tg Ab) = 8 IU/mL, TSI = 63%, and TBII &lt;6%. The 131I-uptake was less than 1%, and a technetium thyroid scan could not visualize the thyroid gland. Additional laboratory tests showed a serum iodine level = 290 μg/L, 24-hour urine iodine = 821 μg (normal, &lt;500 μg), erythrocyte sedimentation rate = 14 mm/h, interleukin-6 = 1.12 pg/mL (normal, 0.31 to 5.0 pg/mL), C-reactive protein = 0.12 mg/dL (normal, 0 to 0.744 mg/dL), and serum thyroglobulin &lt;0.2 ng/mL (normal, 2 to 35 ng/mL). A diagnosis of iatrogenic thyrotoxicosis was considered. The patient at this time mentioned that she had been taking Thyromine TM (Pacific Natural, Burbank, CA) (containing L-tyrosine, thyroid powder from a bovine source, adrenal powder from a bovine source, and other ingredients, such as gugulipid, nori, ginger extract, and piper longum). The patient reported taking 2 capsules three times a day for the previous 9 months. She was advised to discontinue taking Thyromine TMand was also placed on atenolol (25 mg daily) and a low iodine diet. Two months later, her symptoms completely resolved. Physical examination revealed a HR of 54 bpm, BP of 104/70 mm Hg, no hand tremors, no ophthalmopathy, and a barely palpable thyroid gland. Deep tendon reflexes were normal. Laboratory tests revealed TSH = 0.92 μIU/mL, free T4 = 1.45 ng/dL, total T3 = 139 ng/dL, serum iodine = 57 μg/L, and 24-hour urine iodine = 280 μg. The atenolol was discontinued and the patient remained clinically and biochemically euthyroid. 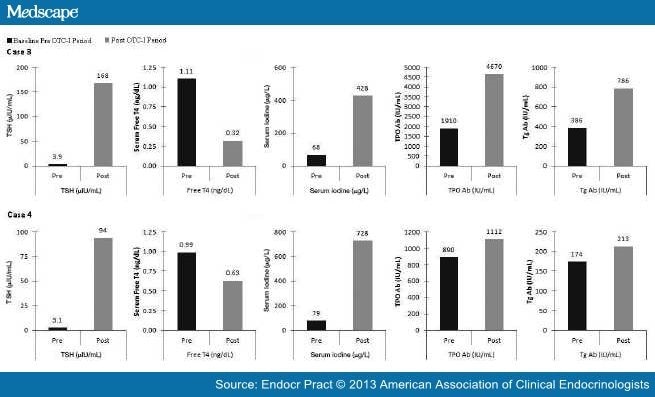 Patients with nodular goiter living in areas of iodine deficiency have a high frequency of hyperthyroidism after the introduction of iodine. [1–4] It is assumed that thyrotoxicosis occurs because of underlying autonomy in the thyroid gland, and with increased dietary iodine supply, the autonomous areas synthesize more thyroid hormones independently of normal regulatory mechanisms (the Jod-Basedow phenomenon). [1–4] However, iodine-induced thyrotoxicosis may also occur in patients without underlying thyroid disease. [1–8]

In the patient with Graves’ disease (case 1), there was an acute exacerbation of thyrotoxic symptoms that correlated with the biochemical findings, even though her Graves’ disease was controlled with thionamide therapy. Interestingly, this patient had a normal initial serum iodine level. The subsequent iodine overload was confirmed by elevated serum and urine iodine levels. The increased serum TSI and TBII levels suggest that this acute exacerbation was possibly mediated by an underlying autoimmune mechanism. Following treatment, which included a low-iodine diet, her clinical symptoms resolved and her biochemical tests were normal, supporting a possible cause-effect relationship. [1–10] The fact that this patient required a relatively high dose of methimazole therapy for a prolonged period is also consistent with iodine-induced exacerbation of Graves’ disease. [1] In populations in North America and other iodine-replete areas, iodine-induced thyrotoxicosis may occasionally develop after therapy with high doses of iodine (e.g., amiodarone therapy, exogenous administration of iodinated radiocontrast agents, or consumption of kelp-containing dietary supplements).[8,11–12] It has been suggested that these patients have subclinical hyperthyroidism before iodine repletion, and thus it is not surprising to find that OTC iodine supplements may aggravate thyrotoxicosis in patients with Graves’ disease or multinodular goiter. Acute iodine administration improves thyroid function in patients with hyperthyroidism; however, escape from the Wolf-Chaikoff effect takes place over several days. Since thyroid functions were not measured soon after the iodine ingestion in our patient, the expected improvement of thyroid functions (Wolf-Chaikoff effect) was not detected and the hyperthyroid state probably reflects the escape phenomenon in this patient. The patient in case 1, who had pre-existing Graves’ disease, was taking 10 to 20 mg of iodine per day, which is about 67 to 133 times the recommended daily allowance of 150 μg, with an upper limit of 1,100 μg in normal healthy adults. [13] The second patient reported here (case 2), developed drug-induced thyrotoxicosis after taking an OTC thyroid extract containing Thyromine TM. The laboratory findings, including elevated serum T3 levels and radiological images, support a diagnosis of thyroid extract-induced thyrotoxicosis. The normalization of thyroid function after discontinuation of the drug supports an exogenous OTC drug as the cause for the clinical and biochemical findings encountered in this patient.

Generally, patients at risk for iodine-induced hypothyroidism include those with chronic autoimmue thyroiditis, postpartum or subacute granulomatous thyroiditis, Graves’ hyperthyroidism previously treated with subtotal thyroidectomy or 131I therapy, and after hemithyroidectomy for thyroid nodules, patients with cystic fibrosis and thallassemia major in conjunction with repeated blood transfusions, [1,4,8–11,14–20] and rarely patients with a normal thyroid gland. [4,8–11,21] In the 2 patients with Hashimoto’s thyroiditis (cases 3 and 4), the overt hypothyroidism was presumably precipitated by ingestion of excess iodine. It is possible that worsening hypothyroidism was the natural progression of the Hashimoto’s thyroiditis, but the temporal relationship of hypothyroidism and elevated iodine levels in the serum and urine support the conclusion that the acute hypothyroid state was indeed induced by exogenous iodine administration. Finally, the improvement in the hypothyroid state as reflected by a reduction in levothyroxine dose is also consistent with iodine-induced hypothyroidism.

Very few previous studies have documented serial changes in urine and serum iodine levels in patients taking excess iodine. The time course for improvement in serum and urine iodine levels as seen in this report varied from 2 to 3 months.

The precise mechanisms of iodine-induced thyroid disorders are not clear. Thyroid nodules may synthesize excessive thyroid hormones when presented with enough iodine due to a constitutive somatic mutation of the TSH receptor in the nodules. [4] It is possible that a similar mechanism may operate in Graves’ disease with TSI-mediated hormone synthesis. The exact mechanism of iodine-induced hyperthyroidism—the so called Jod-Basedow phenomenon—in patients without an underlying thyroid disease is not known. [6,7] It may be concluded that defective autoregulation of thyroid hormone biosynthesis and/or interference with MMI action may contribute to the development of iodine-induced hyperthyroidism in susceptible individuals. [4,22–28] Excessive iodine intake may affect the thyroid’s response to MMI therapy in patients with Graves’ disease in several ways. A high concentration of intrathyroidal iodine may affect the action of MMI, [22] and it has been demonstrated that MMI inhibition of thyroid peroxidase is competitive with iodine. [23] Additionally, Engler et al [24] suggested that it may be helpful to restrict iodine intake in hyperthyroid patients treated with thionamides. Martino et al [25] suggested that amiodarone-induced thyrotoxicosis is due to excessive thyroid hormone synthesis induced by iodine load, and Fragu et al [26] reported a marked increase in the intrathyroidal iodine content in patients with amiodarone-induced thyrotoxicosis, irrespective of the presence of an intrinsic thyroid abnormality. Finally, Azizi [27] demonstrated that patients living in iodine-deficient areas require lower dosages of MMI.

Failure to escape from the Wolf-Chaikoff effect may explain the iodine-induced hypothyroid state in patients with Hashimoto’s thyroiditis. Autoimmune thyroiditis has been induced by the excessive iodine administration in strains of rats and chickens that are genetically predetermined to develop this disease. [29]Experimental data also suggest a direct toxic effect of excess iodine on iodide-deficient thyroid glands. [30]Although the precise mechanism is unclear, these two mechanisms may be involved in the worsening of hypothyroidism in a patient with pre-existing Hashimoto’s thyroiditis.

Many over-the-counter supplements marketed for thyroid health in the U.S. reportedly contain high levels of unlabeled T4 and T3, as well as iodine. [31] In addition, development of congenital hypothyroidism in 3 infants born to women in the U.S. who were taking OTC high-dose iodine supplements was recently reported.

In conclusion, OTC preparations containing large concentrations of iodine, sold under various trade names, can lead to significant thyroid dysfunction in susceptible individuals. There is no valid reason for taking high-dose OTC iodine supplements, which have been demonstrated to cause harm and have no known benefit.